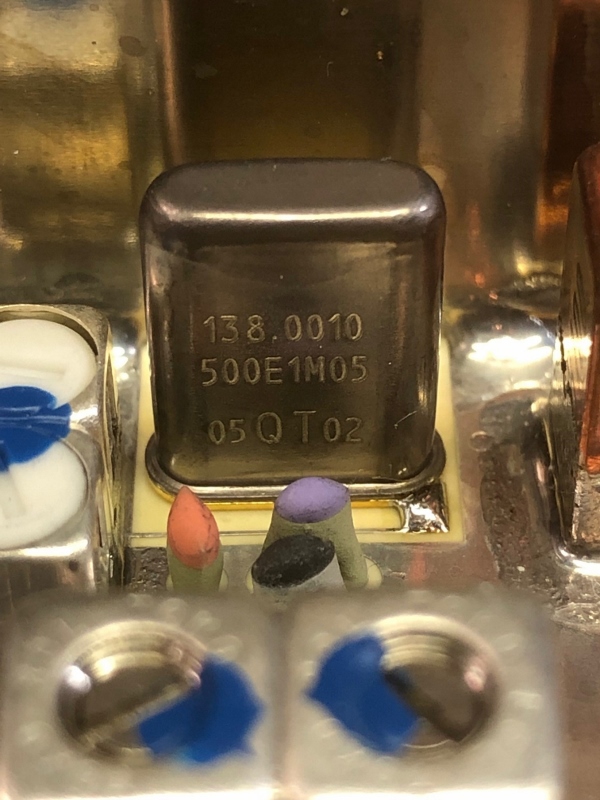 It is desired to convert a Kuhne G2 Model 3456 MHz transverter to 3400 MHz. This involves a crystal change and realignment. With the difficulty of obtaining crystals, it was decided to substitute a synthesizer manufactured by Leo Bodnar in place of the crystal in the G2 and drive the oscillator circuitry at 135.666667 MHz. Other schemes can be used such as replacing the entire LO chain with a synthesizer with output at 3400 - 144 = 3256 MHz..

The original Kuhne G2 Model makes 3456 downconverted to 144 with LO frequency MHz using a crystal for 138.001MHz, trimmable to 138.000 MHz. Both G2 and G3 Model transverters multiply the internal crystal by 24.

It was found in the kit instructions for the G2 that an external source can be used instead of the supplied crystal. It was decided that would be a good way to modify the G2, driving the oscillator at 135.6667 MHz, translating to 3256 MHz for LO. The following is a view of the original kit instructions pertaining to the oscillator mod. 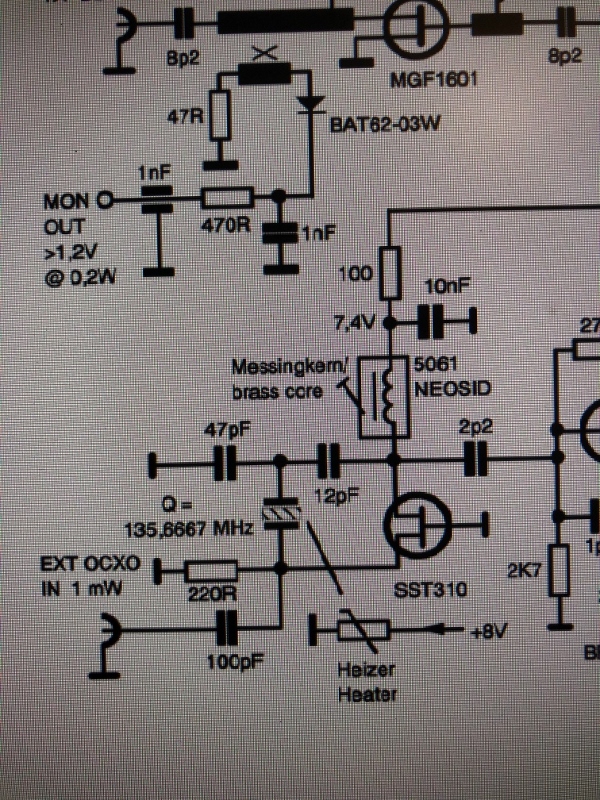 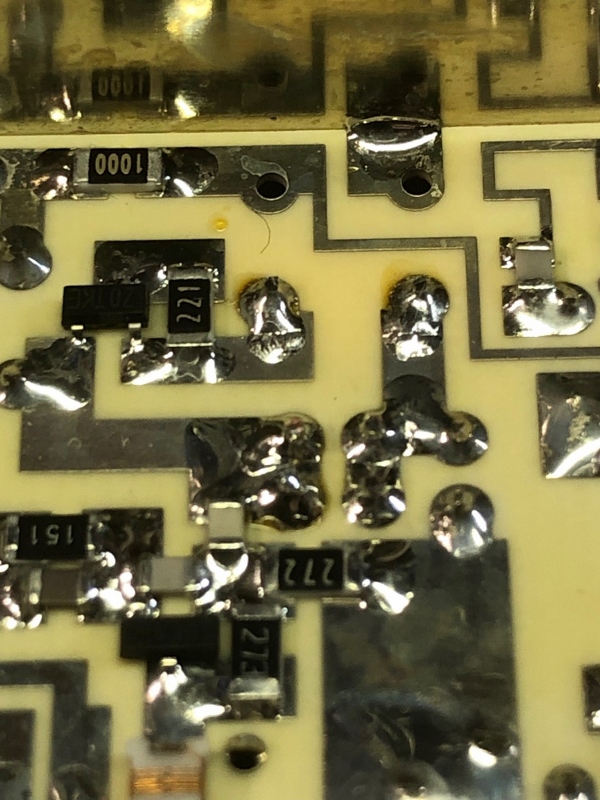 View of the underside of the G2 showing easy access to desoldering the existing crystal.

For comparison the existing G3 3400 Transverter looks like this: 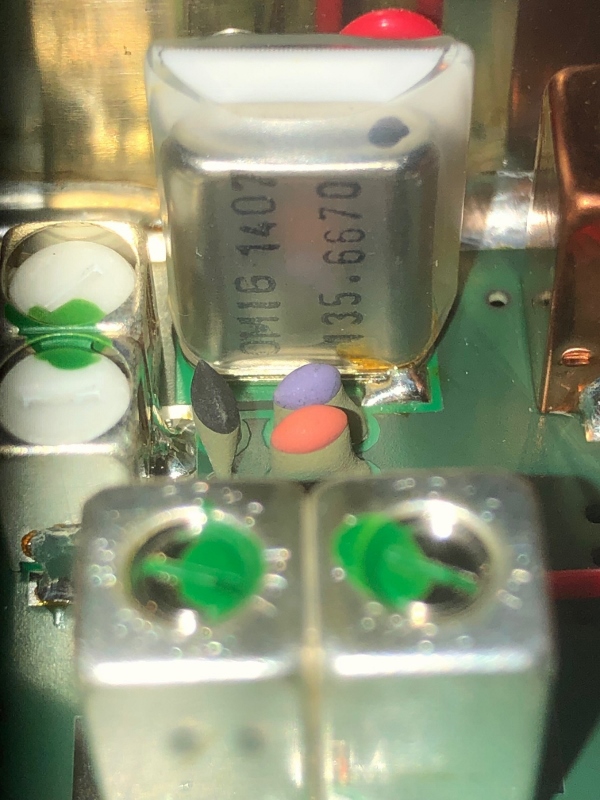 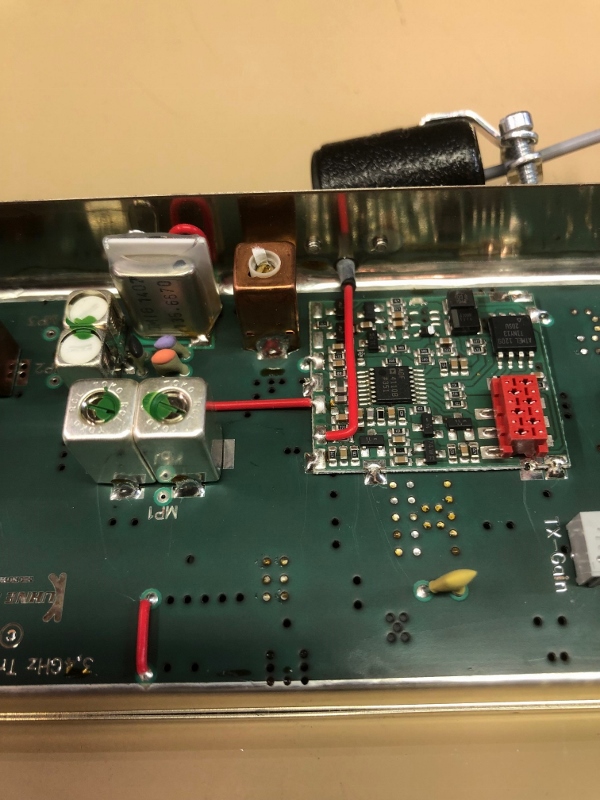 View of the inside of a G3. Note the synthesizer which allows a 10 MHz reference to lock the oscillator

Kuhne has claimed that they are not able to support reprogramming the synthesizer to change from 138.000 MHz to 135.6667 MHz. The G3 must have the LO replaced with an external source and the SAW filters that bandpass the input and post-select the output. The filters are available but the synthesizer reprogramming is not available from Kuhne.

In the G2 Model the filters in the front end preselector and the transmitter postselector are tunable and will cover both frequencies.

The unmodified G2 was initially characterized for gain in order to compare after modification. A DEMI Signal Source LWSS was used as the signal source, attenuated so as to see the signal on a spectrum analyzer at the 144 IF. This allowed measurements at 3456.1 and then at 3400.1 MHz. The output of the LWSS was observed to be -7 dBm on both frequencies. 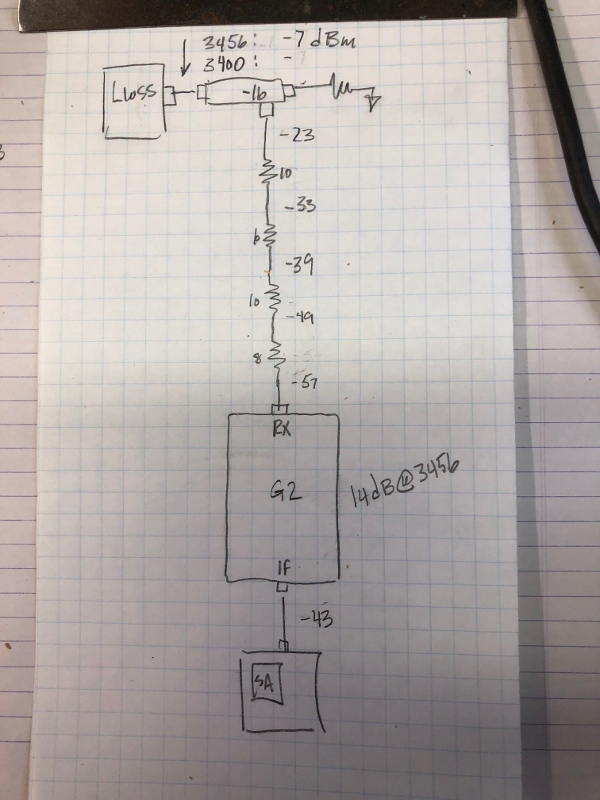 Leo Bodnar provides a Mini-GPS Synthesizer which can be locked to GPS reference, and programmed to frequency. The following image is the set-up program for the Leo Bodnar unit. 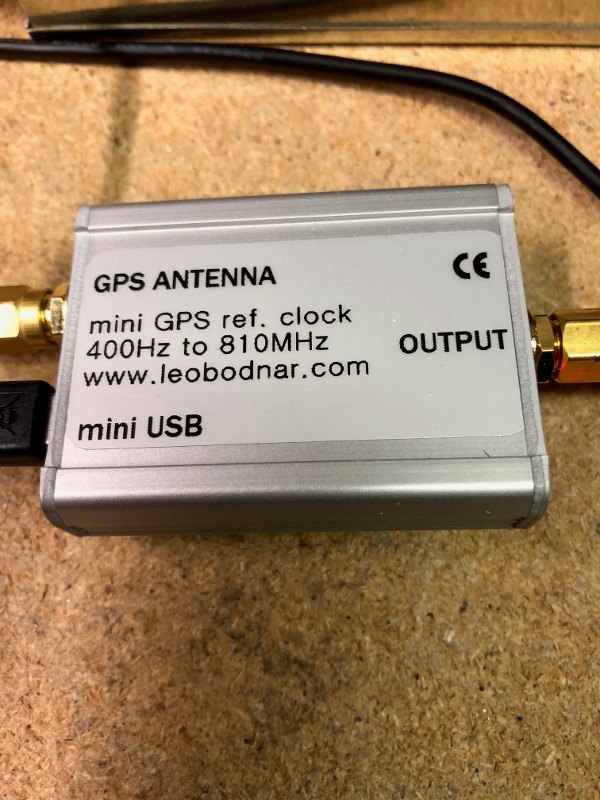 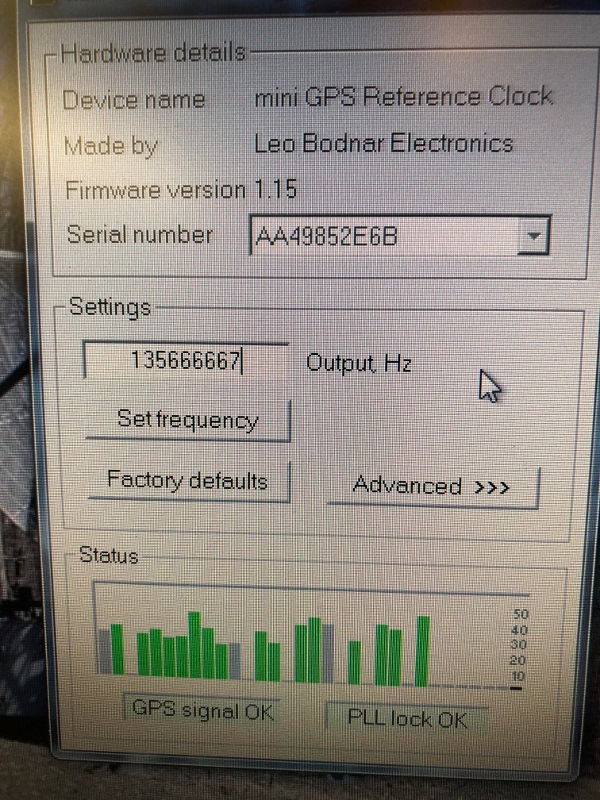 The case of the G2 was modified by drilling a 0.257 inch hole as shown in the image. 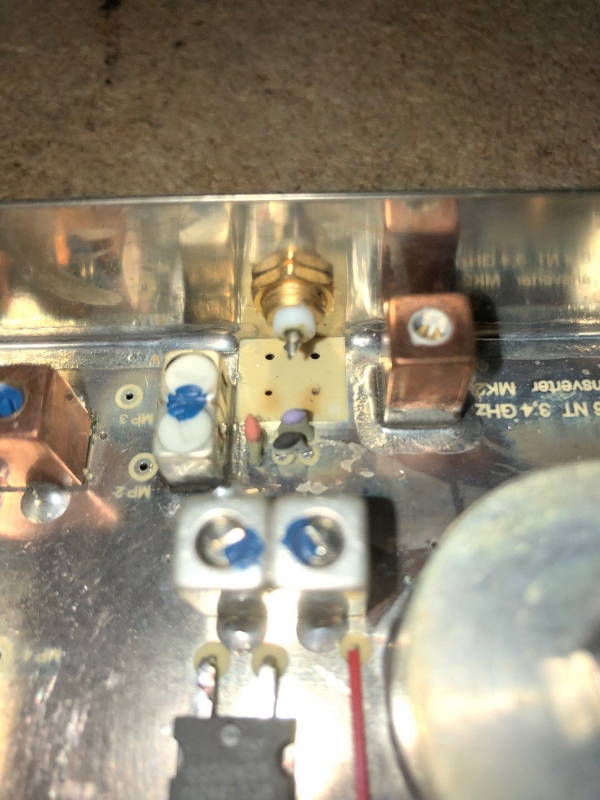 A 100 pf capacitor was inserted in the position shown from the SMA to the oscillator, now acting as a buffer. 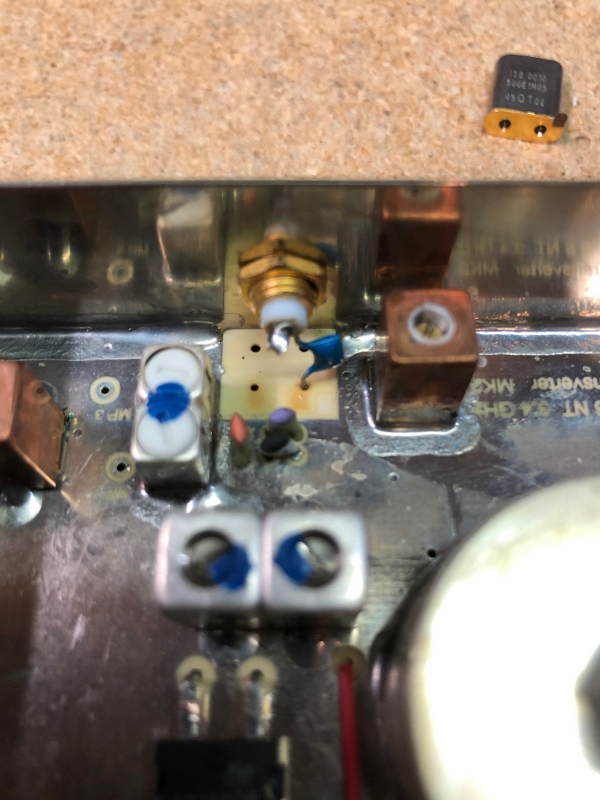 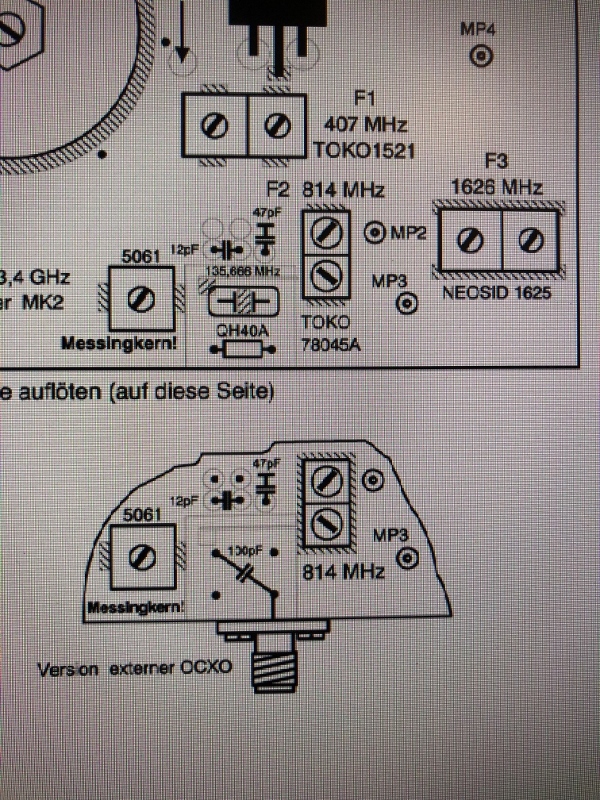 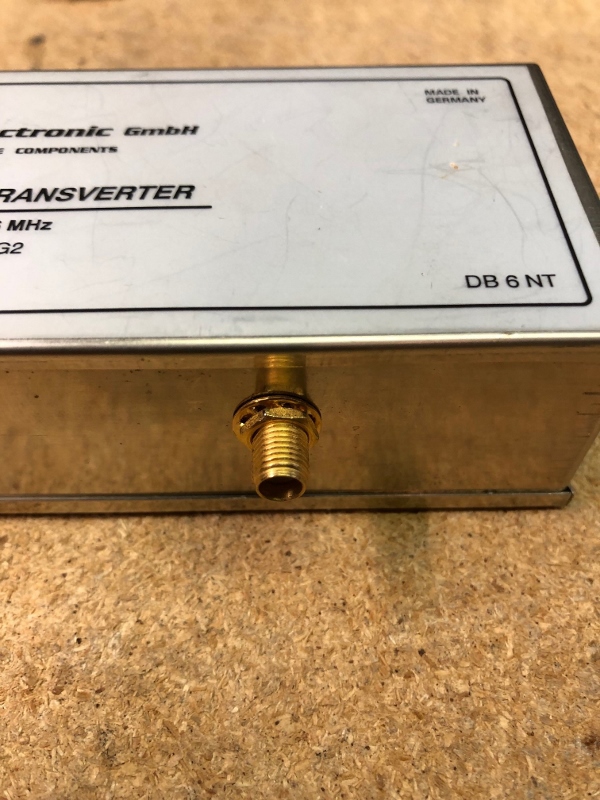 The unit was powered and an attempt to see energy at 144.1 MHz on the spectrum analyzer. This was not visible even on lowest RBW, so it was necessary to probe the circuit board with a coax connected to the analyzer and a 10 pF blocking capacitor for sub-multiple LO energy. This was easilly seen at 407 MHz and 814 MHz multipliers and subsequently peaking of the resonators at the lower frequencies. 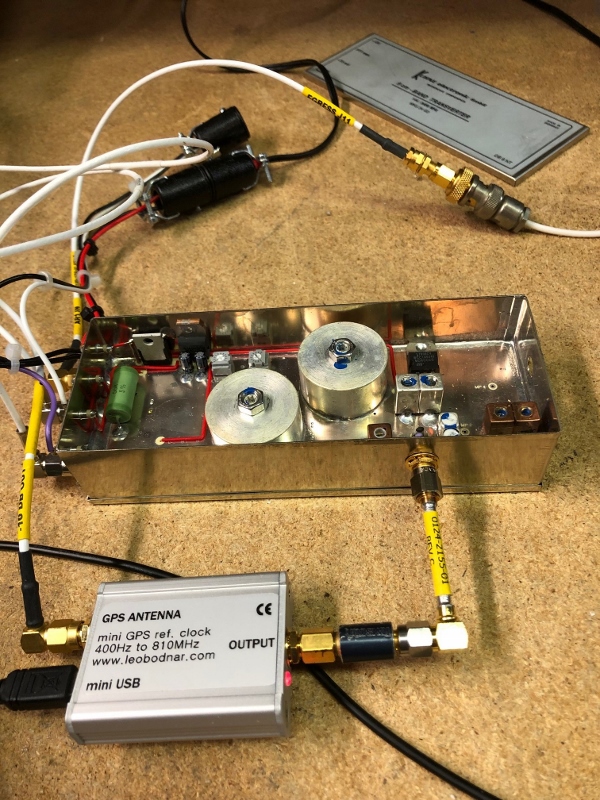 A 144.1 MHz receiver was then placed on the IF and with the applied 3400.1 MHz present. Signal was detected enough to peak the 1628 MHz resonator and the preselector resonator at 3400.1 MHz.using the S Meter of the radio. The IF was then switched back to the spectrum analyzer and the signal was at this point easilly seen, and the stages peaked. Overall conversion gain was seen to be 14 dB which compared well with the unmodified G2. 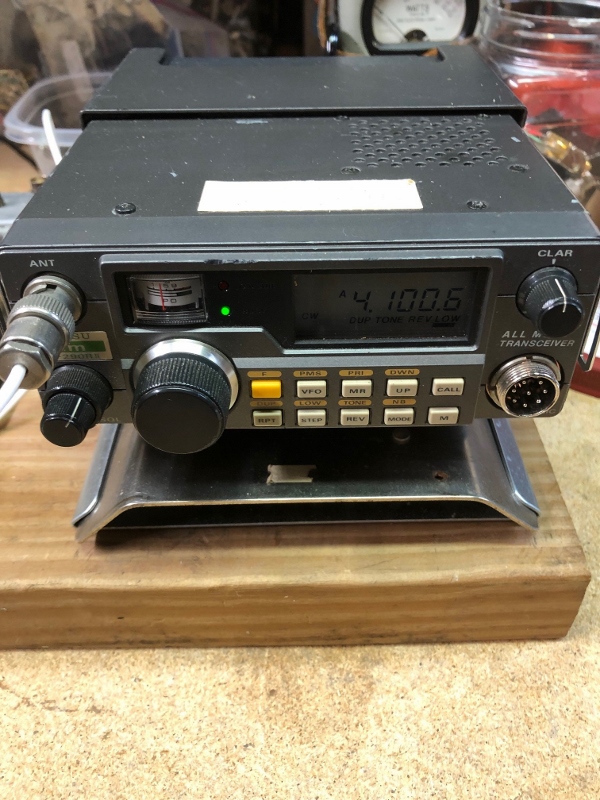 View of IF Radio used for signal detection and tuning

The IF Radio was used to generate a signal and the Transmit path tuned for maximum output. Saturated power looked to be in excess of 200mW. 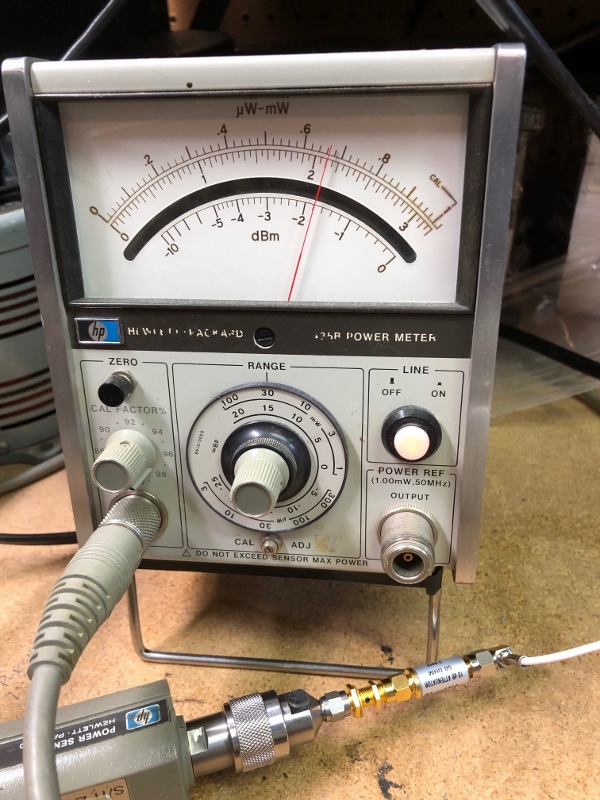 An antenna was placed on the unit and the LWSS placed in an adjacent room and heard easilly on the IF radio. 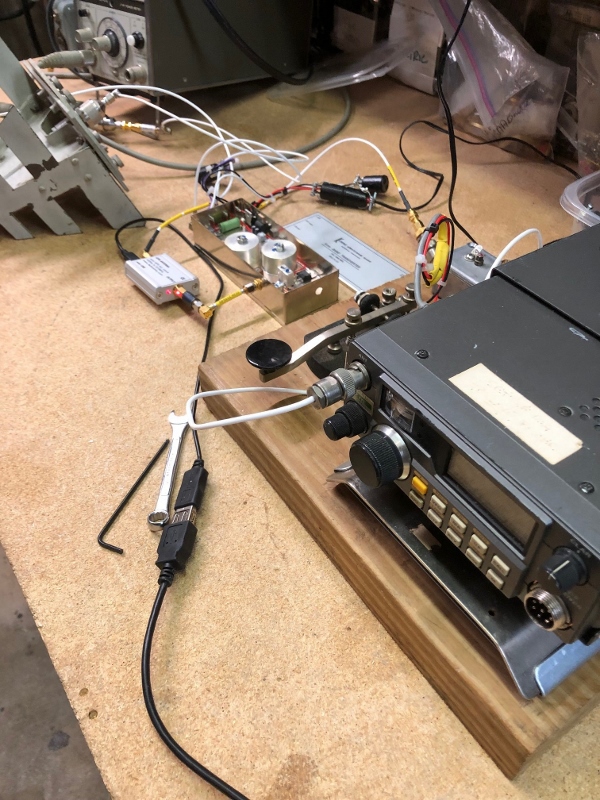